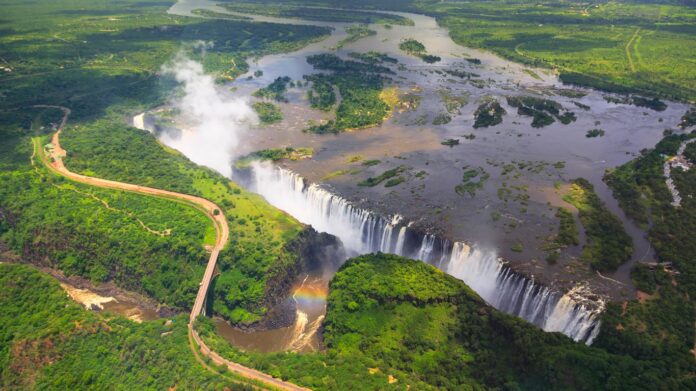 Victoria Falls presents a spectacular sight of awe-inspiring beauty and grandeur on the Zambezi River, forming the border between Zambia and Zimbabwe. It was described by the Kololo tribe living in the area in the 1800s as ‘Mosi-oa-Tunya’ – ‘The Smoke that Thunders’.

Spray can be seen from miles away as, at the height of the rainy season, more than five hundred million cubic meters of water per minute plummet over the edge, over a width of nearly two kilometres, into a gorge over one hundred meters below.

Scottish missionary and famous explorer of Africa David Livingstone (1813-1873) named it after Queen Victoria. Livingstone who was the first European to cross Africa from south to north discovered this awe-inspiring waterfall in 1855, while preaching Christianity in Africa.

The mists of Victoria Falls sustain a rainforest-like ecosystem adjacent to the falls and on the opposite cliff that faces them like a dried-up mirror image, thick with mahogany, fig, palm, and other species of vegetation.

The national border between Zambia and Zimbabwe lies midstream, and national parks of both nations exist on either side of the Zambezi. The gorges and cliffs below the falls in these parks are prime territory for raptors, including falcons and black eagles.

Humans have long relied on the falls, too. Stone artifacts from the hominin Homo habilis have been identified near the falls and show that early humans may have lived here two million years ago. More “modern” tools also evidence far more recent—50,000 years ago—Middle Stone Age settlements at Victoria Falls.

Today, tourism is essential to driving economic growth. Several hundred thousand visitors from around the world trek to the falls each year. Hotels, restaurants, campgrounds, and other tourist businesses have cropped up to cater to them.

The beauty of the falls lies in their natural state, but the area is at some risk of runaway tourism-based development—more resorts, hotels, and even a possible dam below the falls that could flood several park gorges. Operators in the area offer everything from helicopter overflights to bungee jumping, and the management of these activities while preserving a quality visitor experience for all is an ongoing challenge.

The two exercises that will keep you fit for life