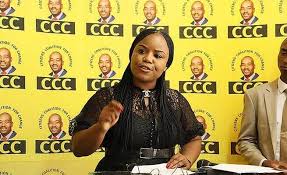 The Citizens’ Coalition for Change (CCC) has assured the country’s security chiefs they will not be fired if the opposition party wins elections scheduled for later this year.

CCC spokesperson Fadzayi Mahere told NewsDay on Wednesday that the party seeks to change the country’s governance culture and ensure that State institutions understand their roles in the running of the country. Said Mahere:

“They are put in place by the Constitution, so we will not change them. What we will change are the political leaders and the governance culture to ensure that we have ethical leaders who put the welfare of citizens at the centre of all decision-making.

Therefore, it’s important for State institutions to understand our disposition toward their existence and our attitude and appreciation of the important role that they play in the running of our nation.”

She made the comments after CCC leader Nelson Chamisa recently pledged to enhance cordial relations with members of the security officers if his party wins this year’s harmonised elections. Chamisa tweeted:

“We will honour, protect and work with all men and women in uniform.

We will and must reward the patriotism and integrity of our security services.

In previous elections, the opposition accused the country’s military commanders, top cops and senior intelligence officers of siding with ZANU PF during elections.

Political analyst Eldred Masunungure told NewsDay that the military has always been aligned with the ruling ZANU PF party which makes it a tricky situation for the opposition. Said Masunungure:

“It is the duty of the security officers to offer allegiance to any government in place.

But in the case of Zimbabwe and many other former colonies, the relationship between the military and the civilians has been delicate.

In Zimbabwe, the military has always been aligned with the ruling Zanu PF party. So it is a tricky situation for the CCC.

The opposition party is trying to allay the fears of the security officers who do not want to lose their posts.

Chamisa is just telling the security officers that if he becomes the leader of this country, they will not be dismissed from service and encouraging them that they must not undermine democracy just for the sake of their military positions.”

On the eve of the 2002 presidential elections, the late army commander General Vitalis Zvinavashe declared that the armed forces would not “support or salute anyone with a different agenda that threatens the very existence of our sovereignty, our country and our people.”

This was interpreted by some political commentators as a declaration that the military was not going to allow the then MDC leader Morgan Tsvangirai to rule even if he were to win the election.