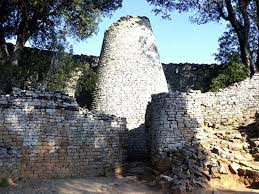 Great Zimbabwe is a ruined city in the south-eastern hills of Zimbabwe near Lake Mutirikwe and the town of Masvingo. It was the capital of the Kingdom of Zimbabwe during the country’s Late Iron Age. Construction on the city began in the 11th century and continued until it was abandoned in the 15th century. The edifices were erected by the ancestral Shona. The stone city spans an area of 7.22 square kilometres (2.79 square miles) which, at its peak, could have housed up to 18,000 people.

Great Zimbabwe is believed to have served as a royal palace for the local monarch. As such, it would have been used as the seat of political power. Among the edifice’s most prominent features were its walls, some of which were over five metres high. They were constructed without mortar (dry stone).

Great Zimbabwe was been adopted as a national monument by the Zimbabwean government, and the modern independent state was named after it. The word great distinguishes the site from the many hundreds of small ruins, now known as “zimbabwes”, spread across the Zimbabwe Highveld. There are 200 such sites in southern Africa, such as Bumbusi in Zimbabwe and Manyikeni in Mozambique, with monumental, mortarless walls; Great Zimbabwe is the largest of these.

Zimbabwe is the Shona name of the ruins, first recorded in 1531 by Vicente Pegado, Captain of the Portuguese Garrison of Sofala. Pegado noted that “The natives of the country call these edifices Symbaoe, which according to their language signifies ‘court'”.

The name contains dzimba, the Shona term for “houses”. There are two theories for the etymology of the name. The first proposes that the word is derived from Dzimba-dza-mabwe, translated from the Karanga dialect of Shona as “large houses of stone” (dzimba = plural of imba, “house”; mabwe = plural of bwe, “stone”). A second suggests that Zimbabwe is a contracted form of dzimba-hwe, which means “venerated houses” in the Zezuru dialect of Shona, as usually applied to the houses or graves of chiefs.

Construction of the stone buildings started in the 11th century and continued for over 300 years. The ruins at Great Zimbabwe are some of the oldest and largest structures located in Southern Africa, and are the second oldest after nearby Mapungubwe in South Africa. Its most formidable edifice, commonly referred to as the Great Enclosure, has walls as high as 11 m (36 ft) extending approximately 250 m (820 ft), making it the largest ancient structure south of the Sahara Desert.

Traditional estimates are that Great Zimbabwe had as many as 18,000 inhabitants at its peak. However, a more recent survey concluded that the population likely never exceeded 10,000. The ruins that survive are built entirely of stone; they span 730 ha (1,800 acres).

Notable features of the Hill Complex include the Eastern Enclosure, in which it is thought the Zimbabwe Birds stood, a high balcony enclosure overlooking the Eastern Enclosure, and a huge boulder in a shape similar to that of the Zimbabwe Bird. The Great Enclosure is composed of an inner wall, encircling a series of structures and a younger outer wall. The Conical Tower, 5.5 m (18 ft) in diameter and 9 m (30 ft) high, was constructed between the two walls. The Valley Complex is divided into the Upper and Lower Valley Ruins, with different periods of occupation.

There are different archaeological interpretations of these groupings. It has been suggested that the complexes represent the work of successive kings: some of the new rulers founded a new residence. The focus of power moved from the Hill Complex in the twelfth century, to the Great Enclosure, the Upper Valley and finally the Lower Valley in the early sixteenth century.

The alternative “structuralist” interpretation holds that the different complexes had different functions: the Hill Complex as a temple, the Valley complex was for the citizens, and the Great Enclosure was used by the king. Structures that were more elaborate were probably built for the kings, although it has been argued that the dating of finds in the complexes does not support this interpretation.

Archaeological evidence suggests that Great Zimbabwe became a centre for trading, with artefacts suggesting that the city formed part of a trade network linked to Kilwa and extending as far as China. Copper coins found at Kilwa Kisiwani appear to be of the same pure ore found on the Swahili coast. This international trade was mainly in gold and ivory; some estimates indicate that more than 20 million ounces of gold were extracted from the ground. That international commerce was in addition to the local agricultural trade, in which cattle were especially important.

The large cattle herd that supplied the city moved seasonally and was managed by the court. Chinese pottery shards, coins from Arabia, glass beads and other non-local items have been excavated at Zimbabwe. Despite these strong international trade links, there is no evidence to suggest exchange of architectural concepts between Great Zimbabwe and centres such as Kilwa.

Archaeologists generally agree that the builders probably spoke one of the Shona languages, based upon evidence of pottery, oral traditions and anthropology and were probably descended from the Gokomere culture.

The Gokomere culture, an eastern Bantu subgroup, existed in the area from around 200 AD and flourished from 500 AD to about 800 AD. Archaeological evidence indicates that it constitutes an early phase of the Great Zimbabwe culture. The Gokomere culture likely gave rise to both the modern Mashona people, an ethnic cluster comprising distinct sub-ethnic groups such as the local Karanga clan and the Rozwi culture, which originated as several Shona states.

Gokomere peoples were probably also related to certain nearby early Bantu groups like the Mapungubwe civilisation of neighbouring North eastern South Africa, which is believed to have been an early Venda-speaking culture, and to the nearby Sotho.

The two exercises that will keep you fit for life